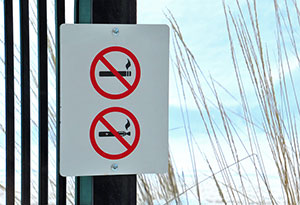 We have all heard about the sharp increase in e-cigarette use, aka “vaping,” among young people. If you are a parent or educator of teens, you’re probably more familiar than most. So why are e-cigarettes suddenly so common on middle and high school campuses? Here’s what you need to know about vaping, and how to protect your teen.

“Vaping” is just another name for using an e-cigarette, which works by turning nicotine (or whatever liquid is in the device) into an aerosol vapor that can be inhaled. According to their manufacturers, e-cigarettes were developed to help adult smokers quit smoking. This is why some cartridges contain little to no nicotine, leading some users to believe they are safe.

Why is vaping so popular with young people?

The CDC reports that young people are now more likely than adults to use e-cigarettes. According to the New York Times, the “explosion” in vaping among teens has been largely driven by a “new generation of easily concealed devices” that are getting past adults who may not even know what to look for. An e-cigarette can be made to look like just about anything a pen, a regular cigarette or a USB drive making them easy for teens to hide and adults to miss. In addition, many teens believe e-cigarettes are harmless, which means that even teenagers who say they would never consider smoking cigarettes are sometimes persuaded to try vaping.

Is vaping dangerous for teens?

Even though inhaling cigarette vapor instead of smoke might make it seem “cleaner,” don’t be fooled. A cigarette is a cigarette, and nicotine is just as dangerous in vapor form. But whether the liquid (often called “juice”) contains nicotine or not, experts agree that vaping is still hazardous to health. E-cigarettes use aerosol, and many produce heavy metals and other dangerous, cancer-causing chemicals. In addition, even e-cigarettes that say they don’t contain nicotine have, in fact, been found to contain the drug. In some cases, defective e-cigarette batteries have also caught on fire or exploded, causing injury to users.

How do I talk to my teen about vaping?

Whether your child has tried e-cigarettes or not, it’s a good idea to talk to him or her about vaping. The Surgeon General recommends that parents find an opening for a natural conversation, and avoid lecturing your teen. Stick to the facts and tell them what you know about vaping and e-cigarettes. Let your child know that, even without nicotine, vaping can be harmful. If your child admits to vaping, stay calm. Let them know it’s not acceptable or safe to continue using e-cigarettes. If your child is having trouble quitting, seek the help of a medical professional.